skip to main | skip to sidebar

Plans for the year...

Yuup...another six to eight months have flown by...well, good thing is there's always so much to discuss with such long intervals in between. Big plans ahead before the end of the year including a children's book (that's right, I'm gonna do it) a book cover and a family reunion trip to the motherland (Kingdom of Tonga in case you were wondering) in December.
Yeah...all of that in the midst of the busiest recruitment season at work which leaves me with very little time to actually relax and chill. Oh well...better to get the work done while I got the energy right? I'm especially excited about this kid's book (might even be teen book...still deciding) that I've been itching to do (I'll be doing the illustration and the writing *crossing fingers!*) We'll see how this all materializes as the months go on but I hopefully plan to have it done and ready for print by next Fall.
Well...I'll stop here and get back to my 42 (and counting) work emails which I've ignored the past half hour. Let's hope I have something awesome to update in 3 months time!
Nofo a...
Posted by TOKA TOCA at 16:17 4 comments: 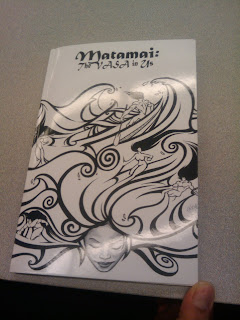 Twice a year...it seems that's how often I update this blog now lol but on the other hand, this way I'll have great things to update you on! right?! haha anywho...been a while since the last post...so why the post now? Well, call it a new year's resolution? Turning a new leaf? Whatever it is, I know I gotta get back in the habit of staying on top of this. Been busy with work this whole year that it became an excuse to move away from a lot of the things that I enjoyed doing in my spare time...I did find time to do this though...

This anthology is the first of a volume of three (or was it two...or four lol) The editor, is a close friend and mentor of mine who approached me with this project towards the end of 2009. The cover art itself is titled "The ocean/VASA in us" which was the overall theme of the two classes he taught that Winter. With this piece, I aimed to highlight the fact that our Pacific peoples are as much a part of the ocean (Pacific ocean that is) as she was a part of us. Mainstream ideology maintains the ocean as an expanse or space that divides and isolates us into confined pieces of land that we now call islands. One of the things this anthology seeks to convey in response to this is the ocean as a sacred space that connects, binds and brings us together rather than isolate us. We navigate her seas, we travel across her waters, but we are always connected to our families, our loved ones, and our land through her VASA.

Well...this is one of several great things that have happened for me within the past couple of weeks. I've got several commissions to work on, a story that I've been thinking about for years now in the process of scripting, a collab project with a good friend, and a new lady in my life.........siiiiike hahahahaha jus kidding :) or am I? hahahaha naaahh...tune in next time...same bat time, same bat channel!

Has it really been a year since I was last here? Man...a lot has happened since...good stuff annnd not so good stuff...now I'm here at almost 2 in the morning blogging and unable to sleep so please disregard anything I say for the rest of this post...I'll put up something more worthwhile to read later...not that anyone reads this but I like to think aliens from outer space do...*oooooooooooooo*...is that the sound their spaceships make? Or is that ghosts? I'm delirious...I need to sleep...aaaand with that, I'm out...buenas noches muchachos y muchachas
Posted by TOKA TOCA at 01:48 No comments: 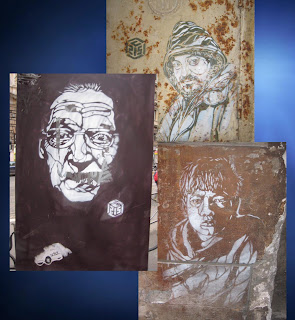 Realization...there is A LOT of great stencil tags in the city of Rome. I'm not saying you'll find one in every direction you turn...you still do have to scour the alleys and streets for these pieces but this is definitely not something one would find in Seattle (new hobby to pick up maybe? hahaha)

The old guy on the left there was on the back of a map in a small park...the hooded guy, I believe was on a garbage bin and the guy on the bottom right was on a wall in an alley...notice the "SCS" box signature which tells us this is the same guy doing these...like Banksy (British stencil graffiti artist) this "SCS" character is probably considered a public nuisance, vandal, or delinquent by more conservative and upstanding individuals in the area for the work he/she does, which forces them into the cover of night, out of sight and away from the eyes of law enforcement...

While this "SCS's" pieces aren't necessarily revolutionary, in-your-face, or critical of current political situations in the world (many of which has been represented in modern art), I think there's a very real humanity and inner character that he/she captures with with these pieces...each character, while very different from the next in terms of age, race, and social standing are all tied together by the intensity in their eyes...nothing conveys human emotion more fully and honestly than the windows to our souls which SCS captures cleverly using a few stencils, a couple cans of paint, and a knack for employing ninja stealth : )

in the end, perhaps SCS just wants us to truly and honestly look at ourselves and others through our soul's windows as an alternative way to solving our current problems? yes? no? It sure sounds like a nice way to tie all these pieces together...but then, we'll never really know unless we talk to this idividual right? still, I like to look at the glass half full so I'll stick with this hehe...what do you think? 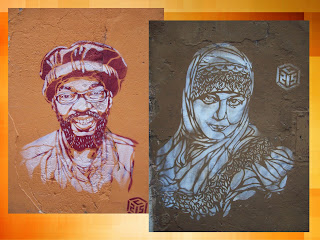 With all the walking I've been doing for the past week, I'm pretty sure I've unintentionally lost a few more pounds geeeze...I'm wasting away...good news is I've come to find plenty more work in the alleys of the great city of Rome!

This guy (or gal!) has never tags the same stencil twice...I'm gonna research this person to see if he/she has some purpose in doing these pieces (maybe they just wanna be noticed..who knows) but by the looks of the detail and the quality, the skill is evident...on top of seeing the magnificent and grandiose sculptures and structures that Rome inhabits, its just cool to see this stuff here too...I wonder if Seattle has these kinds of quality stencil tags...hmmmmm

anyway, I did catch a few more of these while traversing the Roman cobblestone streets so check back for that soon..til then

So uhh...got your novel there?

TOKA TOCA
Lapaha, Tongatapu - Now in Seattle, WA, United States
Born and raised on the island Kingdom of Tonga til age 14. Moved to the U.S. and the rest, as they say, is history...what's the next move? Still figuring that out :)